A Girl with Grit 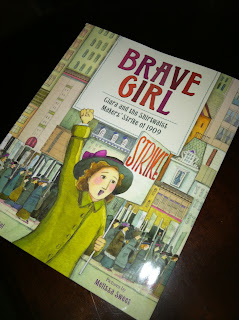 In a world where little girls are bombarded with images of princesses and pop stars, it can be hard to make sure that the women your little girls look up to are women of character, strength, and most of all grit. Grit is not commonly a character trait that little girls aspire to obtain, but it is one that can mean the difference between success and failure later in life. Grit in little girls is often frowned upon, but being pretty and dainty is praised. Just think of the last time you saw a little girl. What is the first thing most anyone says to a little girl? "Look how pretty you are! Look at your pretty dress, and your beautiful curly blonde hair!"

The other day I just happened upon this blog called Watch. Connect. Read. The post was titled "A Snapshot of My Reading Life." While reading through the post, my eyes locked on a picture of the book:  Brave Girl: Clara and the Shirtwaist Makers' Strike of 1909. It took just one look at the cover for me to know that I had to have that book. So I ordered it online, and I was thrilled to find it waiting for me when I got home today.

Brave Girl: Clara and the Shirtwaist Makers' Strike of 1909 is written by Michelle Markel and is illustrated by Melissa Sweet. It is the historical tale of Clara Lemlich, a young immigrant working as a garment worker in the early 1900's in New York City. The story begins with her journey to the US, and the author's description of her, "The girl's got grit, and she's going to prove it. Look out, New York!" As the story continues, you are drawn in as the author details the horrific working conditions these young women faced on the job. Clara, a girl with grit, is not going to just sit by and take it. She works with many others to unionize the workers and organize the great strike of 1909. In the process, she is beaten, arrested, and fired. But, she doesn't give up! She yells to her fellow garment workers, "Stand fast, girls!"

And that is just it, they were mostly girls. Most of the strikers were young girls between the ages of 16 and 25, some being as young as 12. These young girls were not wondering what they were going to be doing on a Friday night or complaining to their parents about what was for dinner; they were out standing up for their rights and changing the world.

The book not only tells a story that should be read in every history class, in every school, in every state in the US, but it captures the heart and emotion of this movement with beautiful artwork. Melissa Sweet did a fantastic job integrating the look and feel of sewn fabric into the pictures. My favorite picture in the book is an aerial image of all the young garment workers sitting at the tables sewing. When viewed from afar, the rows of the young seamstresses' heads appear to turn into stitching itself.

In reading the book to my daughter tonight, it was profound to see her reaction. I asked her how she would feel if she had to work instead of going to school. She insisted to me, "But Mommy, I work hard in school everyday." I responded by telling her, "Yes, you do work hard in school, honey. However, these girls worked hard like the pauper in that movie Princess and the Pauper you watch all the time. They worked long hours and weren't allowed to go to the bathroom or go outside and play. For these girls, there was no prince, like there was in the movie, that came and solved all their problems. They had to solve their own problems and help themselves." She sat there for a while in silence contemplating the lack of a prince on a white horse. I sat there and contemplated if crushing the idea of a prince on a white horse was too cruel.

She also was fixated on the idea that Clara was doing what was right, but she ended up getting arrested and beaten. This is an incredibly difficult concept to explain to a young child. The whole idea that you can be killed, beaten, or arrested for being a good person goes against everything you tell a child about why they should strive to be a "good person." I remember that shortly after Miss M found out that Martin Luther King, Jr. had been killed when she was in preschool, she started to worry that she would be "killed." I didn't put two and two together at first. She would at random times ask me if I would protect her from being killed. I assured her she didn't need to worry about being killed, but yes, I would protect her nonetheless.  Eventually, she explained that she was worried that if she was a good person like Martin Luther King, Jr., that she too would be killed. So tonight, we had to rehash the discussion about why a police officer would arrest someone who was doing "right"  and why sometimes rules and laws do not always reflect the way things should be governed.

In the end, I think the book translated this complex concept of social justice and worker rights to my daughter in a way that makes sense, while at the same time bringing back to life this amazing historical figure.
Posted by Unknown at 8:25 PM