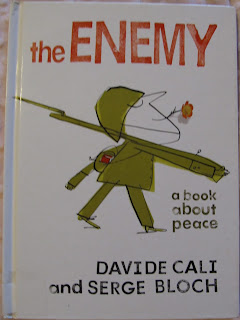 For day 25, we read the Enemy: a book about peace by Davide Cali and Serge Bloch.

This is a book we borrowed from the library. I didn't really look at it before we checked it out, but nearly got into an accident on our way home because of this book. My daughter was thumbing through the 11 books she borrowed when she stopped on one distinct page in this book. She said, "Mom! Look! There are dead bodies all over this page." And then she shoved the book from where she sat in the backseat up towards me, as I was driving. I waited until I came to a stop and turned my head for a quick glance. She added, "See! There is a dead lady," and she pointed to the outline of a woman's breast. Oh, crap. What kind of book did I let her borrow? For a moment I let the rush of Mom Guilt run over me. And for the briefest of moments I felt like maybe I should be censoring her reading choices... 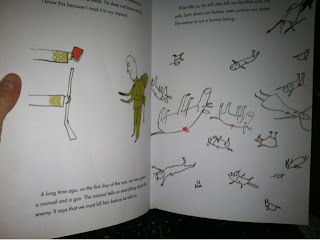 This image, by itself, may seem disturbing; however in the context of the book it makes perfect sense.

The Enemy is a profound story about two soldiers who are at was with each other. They are each in World War I style trenches. The author begins, " Look. Do you see two holes? Look more closely. Do you see the soldiers in those holes? They are enemies." It is from this point that the story is then told from the point of view of one of the soldiers. It is through his eyes you see the futility of war. The soldier says, " Except for hunger, the enemy and I have nothing in common. He is a wild beast. He does not know mercy. I know this because I read it in my manual." It is shortly after this, that the soldier explains what he expects the enemy would do to his family and pets because the enemy is "not a human being." This is where the picture comes in. It is the image of what the soldier fears would happen.

As the weather gets worse, the soldier finally decides to leave his hole and surprise the enemy so that the war can end. Ironically, the enemy has figured he would do the same thing, and they pass each other unknowingly because of their disguises. When the solider goes into the enemy's hole, he is startled by the pictures of the enemy's family and the war manual the enemy has that is similar to the one he was given. He wasn't expecting the enemy to have a family, to be human. He wasn't expecting the enemy to think he was a wild beast, that is what he thought about the enemy.

The story closes in an open-ended way with each of the soldiers writing messages in plastic bottles and then throwing them at each other. You are left wondering if they get the message that the war should end and if they are able to find peace.

When we finally read the story together, we both found it to be profound. Now, Miss M did not use the word profound, but I could tell that is what she meant. The sentence structure in the book is simple, the color palate of the images is also simple, but the message is immense. One one level, you can interpret this book as a cry for peace and an end to war. However, on another level, you could simple read it as a plea to learn more about our "enemies" because they may be more like us then we ever expected.

As much as we try to shelter our children from the realities of our world, the fact is that my daughter is acutely aware that there are wars going on. She notices and comments when we are at the airport and we see soldiers. She makes subtle comments about fighting and veterans. We talk about how bravely my grandfather fought in World War II. She notices when we watch movies if they make references to historical wars. What this book offered was a chance to begin a dialogue. I let her lead the way. Her interpretation of the book was that it is easier to be kind to someone if you know something about them or feel like you can relate to them.

Imagine a world where we learn so that we can be kind.

Email ThisBlogThis!Share to TwitterShare to FacebookShare to Pinterest
Labels: 30 Books of Kindness, peace, the Enemy a book about peace, war