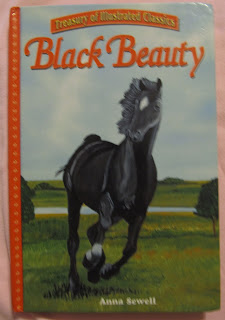 When we sat down to read on day 27, I was quite frankly at a loss for what book to read next. Then my daughter pulled a book out of her book bag and asked if we could finish reading it. It was the classic adaptation edition of Black Beauty that we had found at the library sale a couple of weeks ago. We had started reading it together when we first bought it, and then the book disappeared. What I didn't realize was that she had been bringing it to school everyday and reading during her downtime.

So, with only a few chapters to go, we read the rest of Black Beauty. Even being an abridged version, it still is truly a beautiful story of loss, hardship, perseverance, and kindness. I asked her to explain what had happened in the book that I had missed when she was reading at school. She told me all about how Black Beauty was "adopted" by lots of very mean owners that whipped and overworked the horse. I was touched by how moved my daughter was as we read the chapter where Ginger dies. I had always had a disdain for abridged versions of books, with the feeling that the reader misses the magic of the original text; however, I know that my daughter would have never truly understood the message of the book in the unabridged version. There is plenty of time for her to go back and read the unabridged version when she gets older.

My favorite quote from this book, reads like this in her unabridged version:

" 'The world could be a better place for horses and people,' said our friend, 'if we all troubled ourselves to stop cruelty. If we see such a thing and do nothing to stop it, then we share the crime.'
'I wish there were more gentlemen like you, sir,' said Jerry, 'for they are badly needed in this world.' "

The original quote reads as follows:

" 'Then I'll tel you. It is because people think only about their own business, and won't trouble themselves to stand up for the oppressed, nor bring the wrongdoer to light. I never see a wicked thing like this without doing what I can, and many a master has thanked me for letting him know how his horses have been used.'
'I wish there were more gentlemen like you, sir,' said Jerry, 'for they are wanted badly enough in this city.'
After this we continued our journey, and as they got out of the cab our friend was saying, 'My doctrine is this, that if we see cruelty or wrong that we have the power to stop, and do nothing, we make ourselves sharers in the guilt.' "

In the end, she still got the point.
Posted by Unknown at 8:09 PM