30 Books of Kindness Day 7: Of Thee I Sing: A Letter to My Daughters 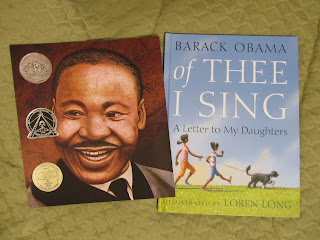 Day 7: Of Thee I Sing: A Letter to My Daughters by Barack Obama, illustrated by Loren Long

The questions about Martin Luther King, Jr. continued for weeks without avail after the events I described in my last post. I searched high and low for something to help me explain things to my daughter, and thankfully my friend recommended Barack Obama's Of Thee I Sing. She suggested it because the book highlights the achievements of many individuals that have changed the landscape of our country. The goal was to get Miss M obsessing about someone else so she would stop obsessing over the fact that Dr. King was killed. So I went out and got the book.

This book is a beautiful letter from Barack Obama to his daughters. In this letter, he describes the characteristics that his daughters hold, and then he highlights how different individuals throughout history have used those characteristics to make the world a better place. The amazing Americans he included in this story were Georgia O'Keefe, Albert Einstein, Jackie Robinson, Sitting Bull, Hillie Holiday, Helen Keller, Maya Lin, Jane Addams, Dr. Martin Luther King, Jr., Neil Armstrong, Cesar Chavez, Abraham Lincoln, and George Washington. I was thrilled with the book. Not only is it beautifully written, but the illustrations are stunning. I couldn't wait to read it to my daughter. The story has so many lessons about kindness, healing, bravery, intelligence, creativity, and other characteristics, that I was sure Miss M. would be inspired by one of the other individuals.

However, a few days later at bedtime she asked me if I would protect her. I was surprised by the question and tried to reassure her that I would always protect her from harm. She was only 4 at the time. I asked her why she thought something bad was going to happen, she told me that she was afraid that if she was a good person she would also be killed like Dr. King and President Lincoln. I was stunned by her acuity. It took a while, but I finally was able to convince her that not all good people were killed because of their good deeds. And Of Thee I Sing helped me with that discussion. We reread it, and I emphasized the kindness and good deeds that the other individuals in the book had done. It was a "teaching" moment for both of us.