Miri Attwater and the Ocean's Secret by E.S. Ivy- A Review 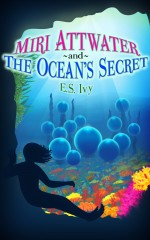 I am lucky, my oldest daughter is six. She still believes in the tooth fairy, the Easter Bunny and Santa Clause. She believes in mermaids and magic. But, the "age of not believing" is quickly approaching. There are little questions like, "How does the Easter Bunny hide all those eggs for all those kids?"Or questions like, "How will the tooth fairy possibly know when I lose a tooth." Since she still has not lost her first tooth, the tooth fairy knowing when this will happen is a pretty big deal. For now, I will relish in the wonder and magic that fairies, princesses and all things pretty in pink bring until that day of not believing comes.

Being originally from the Jersey Shore, I have grown up loving all things that have to do with mermaids. I can remember spending summers on the beach wondering if there were mermaids out there in the ocean. More than wondering, I was hoping that maybe just maybe it would be true. And for that reason, it is not unusual to find mermaids all over the house in various forms. Mermaid baby shoes and Moxie swimming mermaids are just two examples.

When I was little, I distinctly remember that "age of not believing" being directly tied to my using the scientific reasoning skills I was learning in school to rule out the possibility that there was any way mermaids could exist. It was a sad day. I remember almost mourning the idea of mermaids. This is why I was thrilled when E.S. Ivy wrote to me and asked if I would be interested in reviewing her book, Miri Attwater and The  Ocean's Secret.

Miri Attwater and The Ocean's Secret is a coming of age story about Miri Attwater, a young girl who grew up knowing she was a little bit different and how she came to find out she was actually a mermaid. The book begins with a flashback to when Miri's mother gave her up. In a captivating scene, Nerina, the caretaker of Miri, hands the baby in a bubble to her new adoptive "legger" parents, who rode their boat to the middle of the ocean to pick her up.

The book then jumps to a much older Miri, who is finishing the fifth grade and just trying to fit in with her friends. She knows she is a little bit different, but cannot figure out why. Her parents, always meant to tell her the truth, that she was actually a mermaid princess, but the right moment up until then never came. She just knows that she likes her food extra salty and that she can hold her breath for a very long time. As her summer vacation begins, she is slightly miffed by the fact that the rest of her friends are going to get to spend the summer in exciting summer camps while she has to go with her parents on her dad's research boat to the middle of the ocean. What makes it worse is that swimming in the water scares her.

We meet Miri as she spends the day with her friends at a water park/aquarium before they all head their separate ways for the summer vacation. It is on this trip to the park that Miri starts to notice that it is more than just liking salty food that sets herself apart from her friends. When Miri tells her mom later that she almost took the necklace off that she had been wearing since she was born so that she could ride a water slide, her mom knows that it is time to tell her the truth because that necklace is the only thing keeping Miri in "legger" human form.

The book then takes the reader on an adventure to the middle of the ocean, where Miri travels to the mermaid city of Kai Kaona to meet her mother for the first time. Becoming a mermaid princess is a difficult task because there are so many preconceived notions about being a mermaid that Miri soon learns are absolutely wrong. She soon find out the in and outs of being a mermaid- how they breath, how they switch back and forth from legs to fins, and how they live so far under the water.

What I absolutely love about this book is how the author uses scientific facts to create a rule system for this "magical" world. You learn about how a mermaid changes from legs to fins in a way that makes it believable and magical all in the same breath. Using an octopus as an example of how an animal can change how it looks, you can imagine how a mermaid would switch from legs to fins and then back again. You also learn interesting facts about aquatic animals like how surgeonfish are named for the white spine on their tales and how some sharks use electric signals to sense their prey.

The book is filled with delightfully fun parts that are perfect for that 8-12 year old girl wanting to believe in the magic of mermaids. Miri gets to take baths in a large clam shell with "its inside a shimmering rainbow of mother of pearl with a ruffly edge trimmed in gold." I mean, what little girl wouldn't want to take a bath in a huge shell? By far, though, the favorite part of the book in our house was the charm bracelets that the mermaid girls wore. To get a new charm for the bracelet, the mermaids have to purchase a sandcastle statue with charm hidden on the inside. To remove the charm, you scratch the bottom of the statue and sand pours out with the charm. After we read this part of the book, we were both wishing they actually sold charm bracelets like this at the shore.

I think this is the perfect book for any girl to read when she is reaching that "age of not believing" because this book will convince her to believe in fairy tales and magic for a little while longer. I only wish that we hadn't read the book until the second book was published because we were left pining to keep reading when we got to the end of the book. We are looking forward to reading Miri Attwater and All that Glitters when it comes out.


For more information about the Miri Atwater series, check out Miri Attwater's World.

Disclaimer: I was given this book free of charge by the author in exchange for an honest review.
Posted by Unknown at 7:46 PM