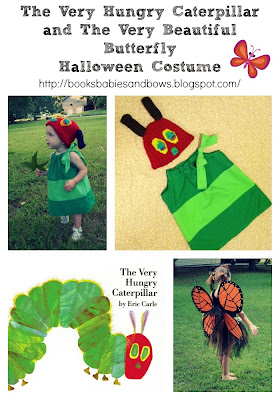 We are big fans of Eric Carle's The Very Hungry Caterpillar. Little Miss J loves to stick her little fingers in each of the holes on the pages where the Hungry Caterpillar eats the different fruits and vegetables. We had the Decatur Book Festival children's book parade to attend in early September, and my oldest thought it would be fun to have the Little Miss go as the Hungry Caterpillar. She wanted to be a princess, but we settled on her going as the butterfly in the end. She didn't want to be a multicolored butterfly like in the book. Ever the scientist in training, she had to go as an actual butterfly. Getting into the Halloween spirit, since we are going to reuse the costumes we made for that parade for Halloween, I thought it would be fun to share how they were made.


To create the costume, I turned, of course, to Pinterest for sweet inspiration. That is where I found a very creative Hungry Caterpillar costume to use as a starting point. I love this costume, but my Little Miss is far too short for it to work. Instead, I decided a pillow case style dress would work great as an alternative. So, I found this pattern on Pinterest to use: http://cutetutes.blogspot.com/2012/10/candy-corn-pillowcase-dress-tutorial.html. The butterfly costume was a bit more complicated, but I will get to that later. 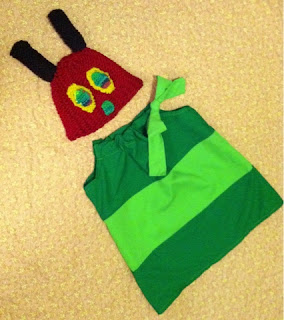 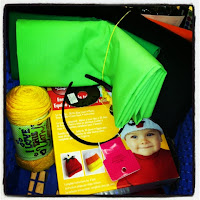 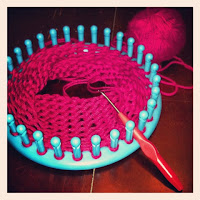 I am not a super crafty person. Actually, I had to teach myself how to thread my sewing machine to do this. So, if I can do it, so can you.

To make the hat, I used a loom to knit a hat out of the red yarn. The loom kit I purchased from the craft store had instructions on how to make a hat that were very easy to follow. 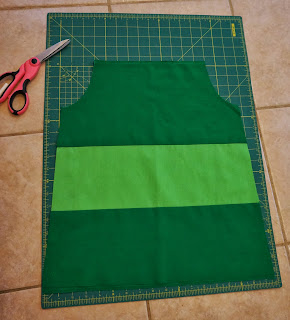 For the nose, I just made a small square using the multicolored yarn and then stitched it below the eyes. Depending on the size of your hat, it will be about six stitches across and about 8 rows.

Finally, for the Antennae, I stitched large rectangles, purling about 20 stitches across and approximately 26 rows. I took the rectangles and sewed them together to make tubes. The tubes I stuffed with a small amount of poly-fill to help them stand up, and then I sewed the antennae to the hat.

The dress, as I said, I followed the instructions on the Cute Tutes blog. (And I think I may go out this weekend and make that dress in the candy corn style for Halloween- it was that easy.)

This costume was very much a labor of love by both my oldest and myself. To make this costume, you will need: 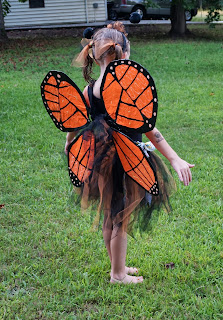 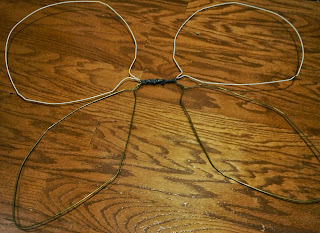 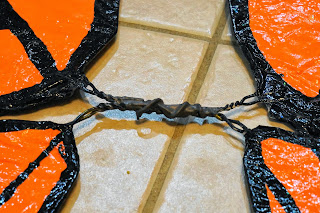 To make the wings-

I took four wire coat hangers and shaped them into the frame for the wings.

My husband wanted to reinforce where I wrapped the "hooks" together in the middle to make sure it wouldn't fall apart, so he used JB Weld (an epoxy) to secure them. 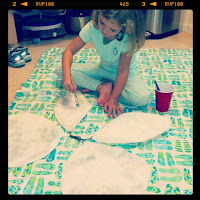 After the frames were made, we took sheets of white tissue paper and carefully wrapped them around the wire, painting Elmer's glue and water (equal parts) on the tissue paper to create the paper thin, wrinkled look of a wing. I allowed the wings to dry over night, and then added a second sheet of tissue paper to make sure they wouldn't tear. After the wings were made, I decided, since I happened to have some in the house, to use Gesso to paint a "surface" onto the wings to accept the acrylic paint. This is really optional, since I am sure the paint would have stuck to the tissue paper just fine. However, I liked the added texture the Gesso added. 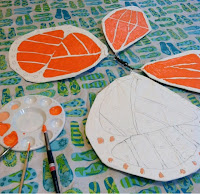 Once the wings were ready, we used a picture of a Monarch butterfly to draw the pattern, and then we used acrylic paints to decorate the wings. (My daughter added some glitter, because what would an art project be without the use of glitter?)

Finally, we painted the wings with Mod Podge to protect them from humidity and to add this fantastic shine. These are the finished wings: 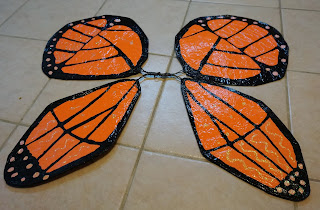 To attached the wings to my daughter, I took elastic and measured it around her shoulders. She didn't like how it looked with the white elastic against her black leotard, so we took some black fabric to line the elastic and create a way to attach the straps to the wings. 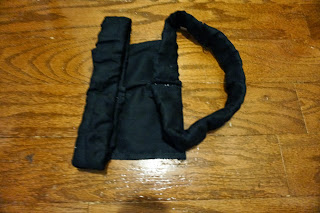 To make the antennae, we took a plain black headband and wrapped pipe cleaners around it. Then, using a hot glue gun, we stuck big, fat, black pom poms to the top.

Finally, we made a no-sew TuTu for a skirt following this tutorial (which I found on Pinterest). I loved this tutorial, especially the link to the video. It was so easy, and I will be using it again in the future to made other skirts I am sure I will need, since I have two girls.

The day before my daughter wore it, we took the leftover tulle and made hair ribbons and added decorations to the headband.

(Now that I finished this costume, I think I am going to do this activity I saw on My Little Bookcase to make these adorable beads inspired by The Very Hungry Caterpillar.  I LOVE this blog and the amazing ideas she posts.)


What do you think? If you make this costume, please let me know how it works!