How I'm A Frog! by Mo Willems Taught Me to "Lean In"

A couple of weeks ago, my oldest was reading I'm a Frog! by Mo Willems to Little Miss J, while I sat nearby listening to them. The book is about Piggie pretending to be a frog and a confused Gerald trying to understand what it means to pretend. As with all Mo Willems books, they are simple enough to keep my toddler entertained yet complex enough to engage my seven year old daughter. We sat there giggling over how Gerald was convinced that Piggie had spontaneously turned into a frog.

The giggling continued until we got to page 40, where Gerald asked Piggie if even grown-up people play pretend. "All the time," stated Piggie. And that was when my daughter turned to me and said, "Just like you mom! You know, when you go to work and pretend to be something you aren't." 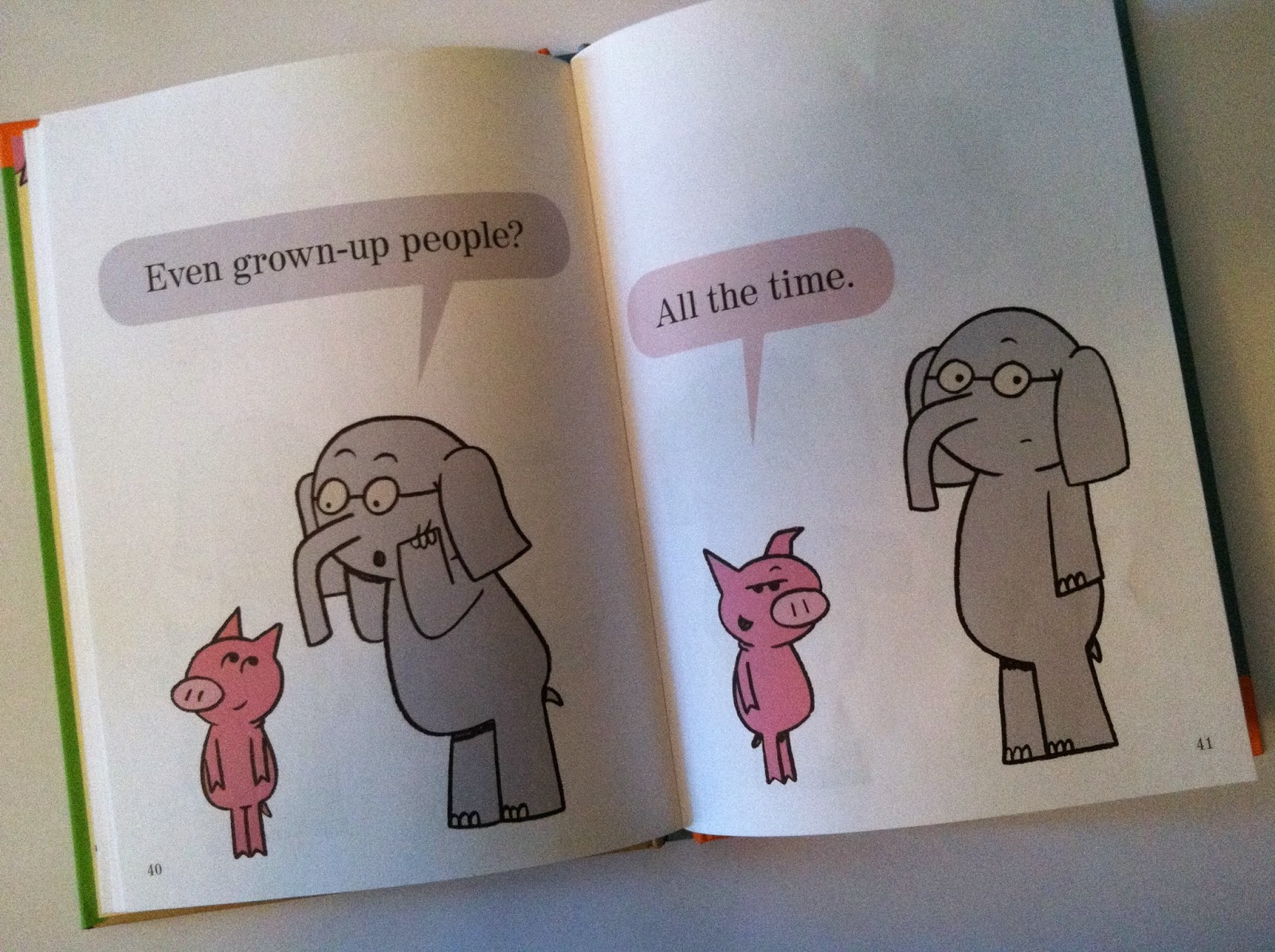 I was stunned. I was shocked. Does she really think I am a sham? I really didn't know what to say. I let it drop and complained to my husband of my failure as a parent, an employee, and a woman. I racked my brain trying to think of what it was that I said to make her think my work and life's passion was just all pretend to her. 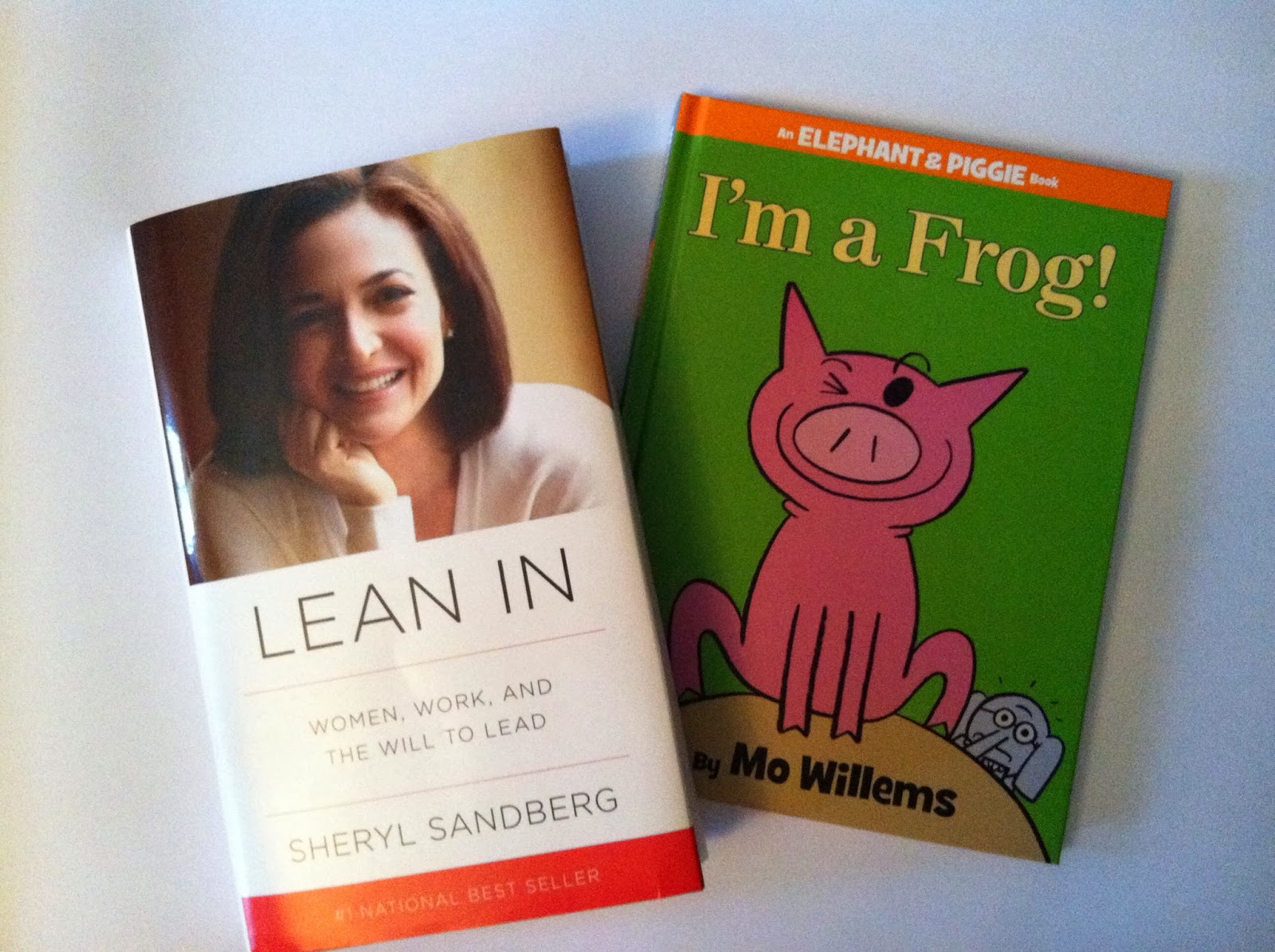 A week later, I started reading Lean In: Women, Work, and The Will to Lead by Sheryl Sandberg for a book club I had joined at work. It was on page 28 that I had my eureka moment. "That's it!" I shouted from my bed over to my husband, who was ironing his clothes before bed. "What's it?" He glared at me. Seriously, had I awoken one of the kids over my exclamation it would have been a long night settling them both back to bed. I went on to read to him the story that Ms. Sandberg recounted from a lecture by Dr. Peggy McIntosh:


"She explained that many people, but especially women, feel fraudulent when they are praised for their accomplishments. Instead of feeling worthy of recognition, they feel undeserving and guilty, as if a mistake has been made. Despite being high achievers, even experts in their fields, women can't seem to shake the sense that it is only a matter of time until they are found out for who they really are-- imposters with limited skills or abilities."

That was it. Maybe my own self-doubts were observed and internalized by my daughter. That was why my daughter thought I "pretended at work." I began to list all the times I had discounted something I had done at work after my husband had highlighted my accomplishment. I cringed as I recalled saying at the dinner table, "I had to pretend I knew what I was talking about at that meeting." While I thought it was just my husband and I conversing about the monotony of workplace meetings, she was internalizing the statements as facts. My hyperbole of understanding had become an explanation of inadequacy to my daughter.

It occurred to me that maybe I could gain just as much advice on "leaning in" from my daughter as I could from a business executive. A couple of days later, I pulled I'm a Frog! out and suggested we reread it. However, after our second read of the book, I came away with a slightly different perspective. We started to talk about adults pretending. My daughter pointed out that I pretended until I was finally able to obtain the certification for my field, a certification that requires years of job experience before you are eligible to sit for the exam. Her tone was not negative or judgmental. It was just matter of fact.

Whatever she truly meant by her remarks, she made me realize just how much she is learning by my example (how I present my own challenges and accomplishments at work) more so than what we tell her about her own challenges and accomplishments. It is incredible what I am learning from my daughter by "leaning in" to reading with her, and this experience proves just how valuable reading out loud with an older child can be for both the parent and child.
Posted by Unknown at 6:56 PM