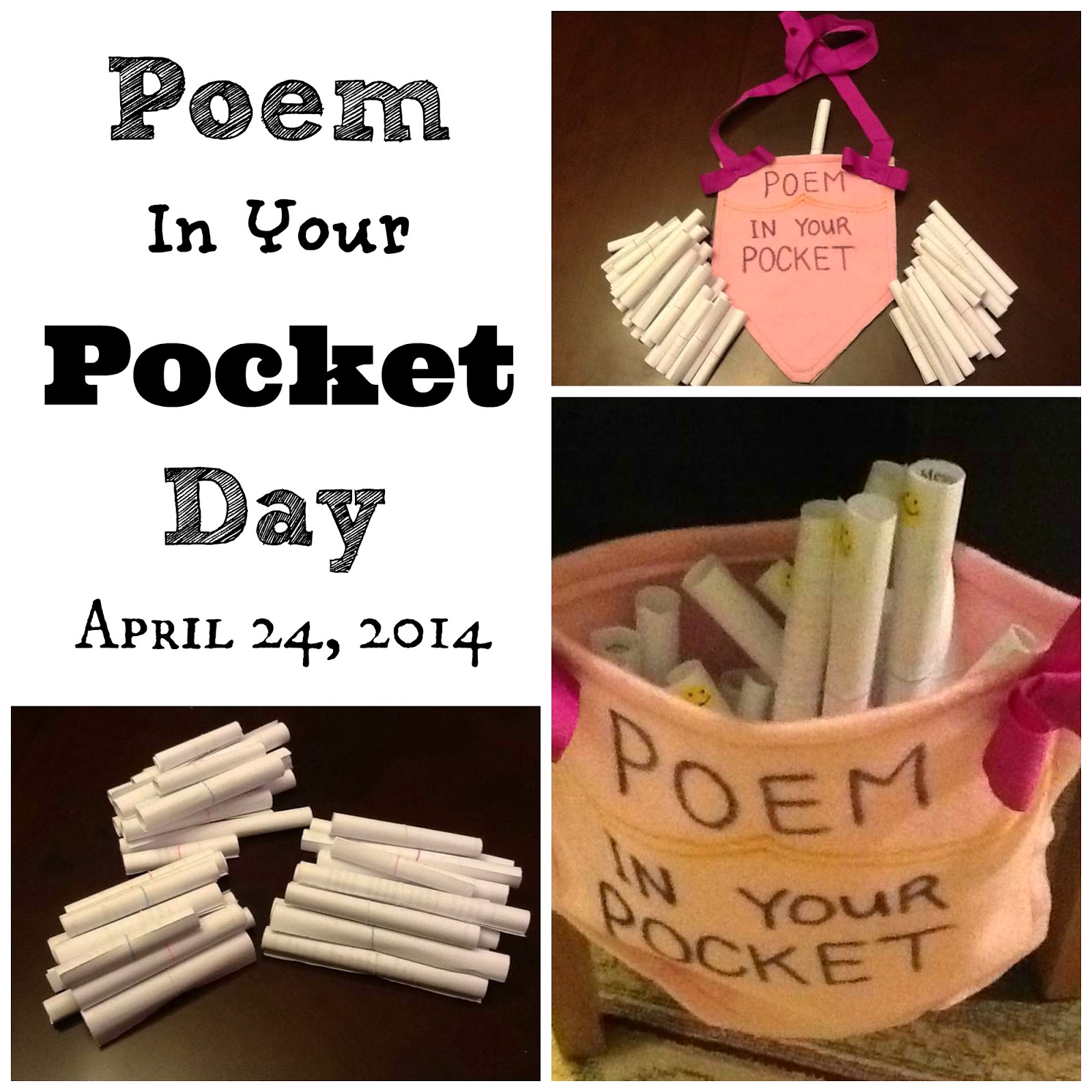 When I was a child, one of my favorite books to read with my mom at bedtime was the Random House Book of Poetry. We ended each of our reading sessions with the last poem in the anthology, “Keep a Poem in Your Pocket” by Beatrice Schenk de Regniers. Part of it goes: 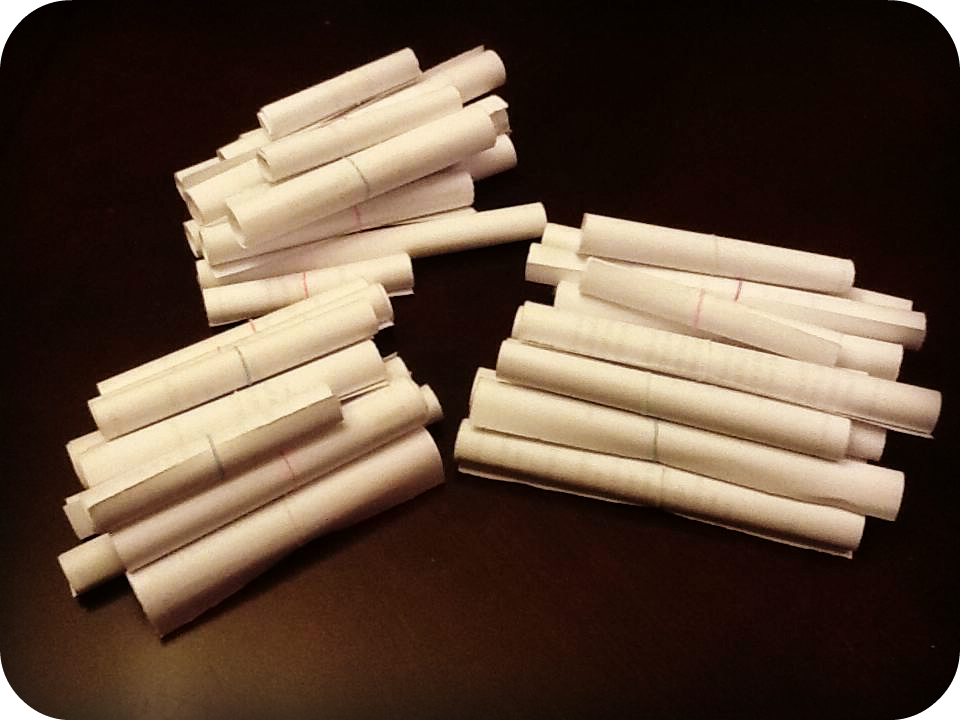 Keep a poem in your pocket
And a picture in your head
And you’ll never feel lonely
At night when you’re in bed.
The little poem will sing to you
The little picture bring to you
A dozen dreams to dance to you
At night when you’re in bed....
I always loved the idea of words and images—in essence: thoughts, memories—keeping me company when I felt alone.

That’s what stories are and have always been to me: a way to belong to something, to connect my experiences with someone else’s, a way to form relationships. If you think about it, we have more in common than we don’t. How do we know? Because of our stories.

Nestled in our calendar between National Zucchini Bread Day and World Penguin Day is a fantastic observance you may never have heard of: Poem-in-Your-Pocket Day. This April 24th, people across the country will keep a poem in their pockets—literally—and that poem just might be the key to opening us up so we’ll never feel lonely again.

I didn’t always appreciate poetry. In fact, I used to hate it. I think one of my favorite lines from Beauty and the Beast’s “Mob Song” sums up why (and also pretty much explains human nature): “We don’t like what we don’t understand, in fact, it scares us, and this monster is mysterious at least.” For me, poetry wasn’t quite a monster, but there were times in class—especially when I was asked to analyze it—when I might’ve given anything to slay it.
In 9th grade, I copied Emily Dickinson’s “Success is counted sweetest” onto the cover of one of my textbooks—not because the poem meant anything to me, but because it was short. Each day awaiting the start of class, my friend, Melinda, and I would read it. Soon, we’d memorized it and amused ourselves with speed recitations. Though I knew all the words, I didn’t understand their meaning.

One night later that same year, I was talking to my mom before bed. In the preceding years, she’d been earning her degree in elementary education. As a woman entering the field in her late thirties, her age worked against her and she wasn’t having much luck finding a position. That night, she talked sadly about the young teachers she’d met who already had positions and didn’t realize their good fortune. She didn’t begrudge them their jobs; she just felt the frustration and pain of being passed over herself and longed for a chance of her own.
I wanted to comfort her, but at 15, I didn’t have any sage words to offer.
But then—from somewhere deep inside—I heard my voice filling the silence that stretched between us: 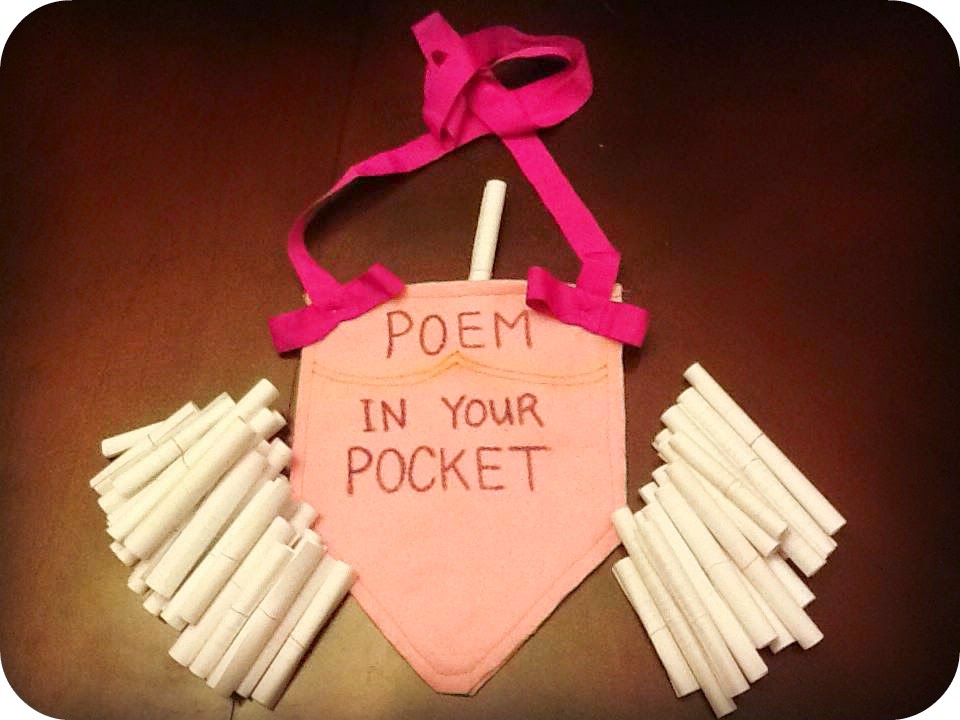 Success is counted sweetest
By those who ne’er succeed.
To comprehend a nectar
Requires sorest need.

As he defeated—dying--
On whose forbidden ear
The distant strains of triumph
Burst agonized, and clear!

The air crackled around me as, like magic, the poem was no longer a bunch of words strung together in some easy-to-recite rhythm and rhyme. Now it was more. I understood her frustration, felt the timelessness of it. My words—Dickinson’s words—helped my mom feel understood, less alone in that moment. I’d always loved reading and writing, but poetry seemed so abstruse that I held it at arm’s length. But this poem on this night made me finally realize why people love it: it wasn’t just about those “poetic things” we studied in class; it was about understanding the human condition and trying to make sense of the world around us.

I won’t pretend I had a complete turnaround after that (after all, I majored in English Literature as an undergrad and some assignments worked hard to kill the magic) but those magic poetry connections kept popping up and couldn’t be ignored.

They happened when I taught high school English at a school that sponsored an annual Jazz & Poetry Festival. On that day, classes gathered in the library where both students and staffers shared their favorite poems with a listening crowd. That day the world shifted for a few precious hours as the kids who were usually bookish became the stars of the show, and poetry in school was considered cool.

They happened when my life changed drastically without warning and I struggled to make sense of what happened and how to move past it. During that time, I listened to an album whose lyrics spoke to me, made me feel completely understood, and gave me strength to fight another day.

They happened last year when I celebrated Poem-in-Your-Pocket Day (PIYPD) with my daughter.

The premise of PIYPD, celebrated as part of April’s National Poetry Month festivities, is that everyone carries a poem in his or her pocket and shares it with other people throughout the day. Why? For enjoyment, mostly, as people come together over a poem.

Last year as April began, I started reading silly poems to my 5 year old. I explained poetry month, and I told her about PIYPD. I’d watched a video posted on poets.org about a group of people who handed out poems that day, and I asked her if she wanted to do it, too. She was enthused to begin immediately, so we undertook our preparations in anticipation of the big day.

I printed out twenty poems and rolled them into tiny scrolls and my daughter sealed each one with a sticker before putting them in a basket for carrying. When PIYPD arrived, we took our basket with us on our daily errands which, that day, included a visit to the grocery store. As we shopped, my daughter gave out the scrolls to random shoppers—all women because, well, she was five and didn’t like approaching men—with an enthusiastic (though sometimes unintelligible), “Today is Poem-in-Your-Pocket Day, so here’s a poem for your pocket.” Understandably, some of them looked at me in confusion and required additional clarification.

Most of the recipients were gracious, some even seemed touched, and I was thankful for their kind reactions which helped make the experience more special for my daughter. One woman’s reaction, though, stood out to me: “Thank you so much,” she beamed. “This made my day!” Maybe she was just being polite, sure, but maybe that simple poem scroll, proffered from the hand of a child seeking nothing, had offered that woman a chance to feel recognized and connected, and like a part of something in that moment. I don’t care if I sound melodramatic, because I believe there was some magic at work that day, and I was thrilled to be sharing it with my daughter who got to experience, firsthand, how poetry can connect us.

We’re eagerly awaiting our opportunity to celebrate again this year. For all the pain and fear that surrounds us in the world, there’s even more hope and camaraderie, if only we can bridge the gaps. My older daughter (6 this year) and I have prepared our versions of bridges: the poem scrolls.  As before, we printed them out and rolled them up; this time we abandoned stickers (not sticky enough) in favor of mini-rubber bands to keep them rolled, and they await distribution on Thursday, April 24th.  There are 44 in all because this year, at her suggestion, she’s going to bring one for everyone in her class and then we’ll run some errands after school to give out the rest. I’m even toying with the idea of making her a hanging “pocket” necklace out of construction paper or leftover fabric in which she can keep the scrolls. (We’ll see if there’s time. But, as Burns noted in one of my favorite lines of poetry, “The best-laid schemes o’ mice an’ men/ gang aft agley”…Ha!) 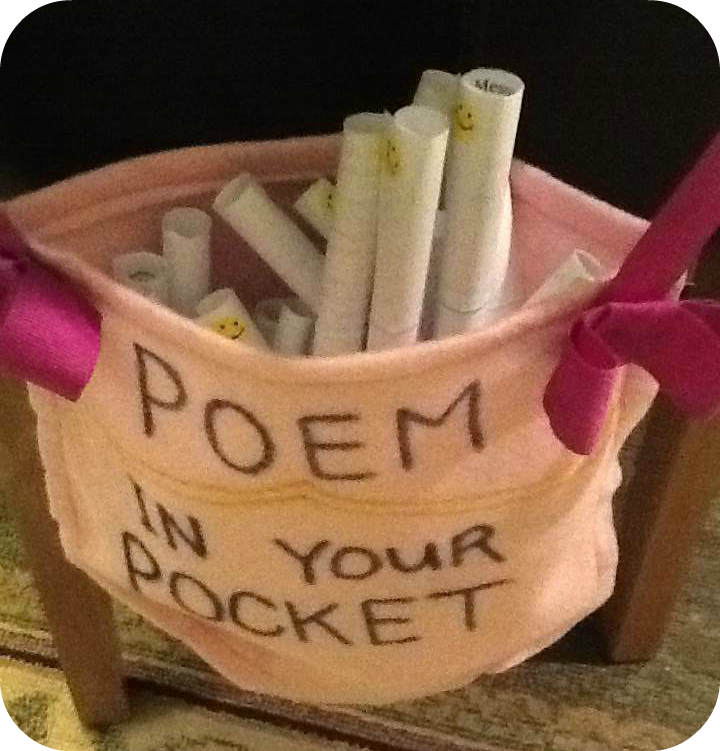 There are fabulous resources for PIYPD at on the poets.org website here, including printable poems and other ideas for celebrating the event. We used those printables last year because they were so convenient, but this year we’re branching out and selecting some of our favorites from poetry books we have at home. There are so many options!

Whether you choose to keep your favorite poem in your pocket and share it only with friends, or hand out poems to family, co-workers, neighbors, or even strangers, I hope you’ll be part of the magic this year on April 24th; you never know who you may touch.

While Natalie and I only went to college together our Freshman year, we bonded over games of cards and lots of laughs that formed a friendship that has only grown stronger with time. I hope you have enjoyed her post as much as I have!
Posted by Unknown at 12:00 AM