The Little Prince- A letter to Baby Moses

I wrote this back in November of 2009. For some reason lately, this story keeps coming into my mind. It is funny how memories have a way of disappearing for while and then creeping back up again.

I don't really have the words to articulate what I feel. The only thing I can equate it to is that of something being lost in translation because when I write down the words, it just isn't the same.


Recently, I reread The Little Prince by Antoine de Saint Exupery in English. And even though the book said what the words in French meant, something was lost in translation. In particular, I think of one chapter about sunsets and how watching a sunset is soothing to the soul when you are sad. A quote from the French version from that chapter is all I can think of to describe the way I feel. It reads: "Tu sais...quand on est tellement triste on aime les couchers de soleil." Maybe it is the way the book was taught to me in French class or maybe it is just the memory of how I felt when I initially read it, but reading the English version does not evoke the same emotion. 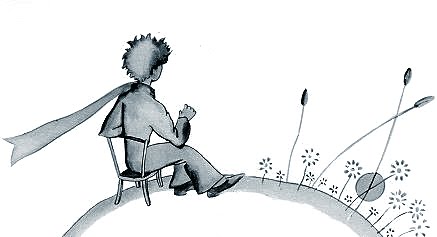 
Late this afternoon, the sun set on little baby Moses. That is what a friend of mine named him when I told him the back story on his short life.

Several days ago, in the wee hours of the morning, my husband and his co-workers were called out to search for an abandoned baby. I saw images of my husband digging through a dumpster while wearing a Tyvek suit and gloves on the morning news. The woman on the TV told a story of a baby found alive in a storm drain after the parents of the child led the police on a wild goose chase telling them the baby was in a dumpster at a gas station. The dramatic imagery of my husband frantically digging through vile trash made great TV and seemed surreal. This image was so different from what I saw. While I watched the news story on the TV, my husband was struggling to fall asleep and wash away the images of his long night. I leaned over and kissed him. I told him I loved him and was proud of him, and then I left for work.

All night it was raining. Raining hard. And in the vastness of our urban wasteland, rain equates flooding. But, for some strange reason, the little boy, for hours after his parents abandoned him, he kept kicking, crying, and fighting for life. Simultaneously, an entire army of people were searching for this little body. And in the wee hours of the morning, my husband and his co-workers found him in a storm drain. I cannot tell you how proud I am of him. He is my hero.

I asked him for details, and all he said was, "He is so small."

And then, today, my husband called to let me know that he went to visit the little guy in the hospital and that he had died.

What do you say? I don't know.
He fought to be found.
He did not die in that storm drain.
He did not drown.
He did not get swept away by the water.
He died in a warm bassinet. And for that I am thankful.

After I got off the phone with my husband, I went over to let my dog out the back door. And for the first time that day, I saw the sun as it was setting.You know, I love the sunset when I am sad.

I was thankful for the setting sun breaking through the rainclouds.

Godspeed little Moses. May you know that you were loved.
Posted by Unknown at 12:28 PM