I should be writing reviews for books I have received the past couple of months to review, but my desire to write has been stalled. (So if you sent me a book, I haven't forgotten about you. I promise.)

An accumulation of a million excuses has dried up my drive to share the books that continue to shape my daughters' worlds. While my thoughts can't seem to formulate into complete sentences these past couple of months, I have replaced writing with running. Running to find myself and where I belong in this world. 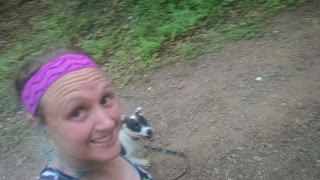 I am thankful for the puppy (Bretagne) we adopted from Angels Among Us Pet Rescue because she has shown me what pure joy is when running. We sprint up hills and splash in streams. It isn't a chore to run, when I run with her. She smiles when we run. 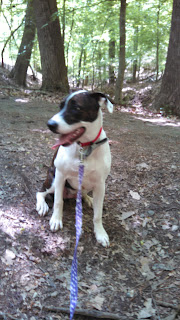 I decided to train for the Disney Marathon in January of 2017 with Team in Training. So many times, early in the morning as we run through the trails of Kennesaw Mountain Battlefield, I am overwhelmed with the spirits of those who have lost their lives as the fog lifts from the fields. Sometimes, Bretagne will stop dead stride and stare, as if she has seen a spirit. Sounds hokey, I am sure. However, somewhere around 4000 people died during the battles that happened during the Civil War on that mountain, so I imagine it is possible. I think a lot about life and death. I think about friends and family I have lost along the way, especially those that have lost their battle with cancer. Cancer is such a horrific illness, it makes me wonder if it is any different that walking into a bayonet, how many men lost their lives on the trails I run.

This morning, as I was running, I ended up wanting to tack on an extra half mile, so we turned down a path that I had never been down before today. As I turned onto the trail, the song Better Days by Eddie Vedder came on my iPod.  The trail was magical, lush with green moss, a flowing stream, and flush with wildlife that that hadn't been disturbed yet by runners that morning. We saw a beautiful white owl take flight, and the sadness that had been inside of me seemed to be replaced with hope. Running for a cause, even if I will only make a small bit of a difference seems to give meaning to the thousands of steps that I take each day.


"I'm running... from something
I'm running towards the day... wide awake
all whispered... once quiet
now rising to a scream... right in me
I'm fallin'... free fallin'
world's calling me... up off my knees
oh, I'm soaring... yeah, and darling
you'll be the one that I can need..... still be free
our future's paved with better days." Eddie Vedder- Better Days


If you want to check out my fundraising page, please check it out: http://bit.ly/runjennay.
If you choose to donate, please know that during my runs, I will run for the people in your life that have been affected by cancer, in hopes for better days.
Posted by Unknown at 10:17 AM